The Performance Privilege: Why Accessibility Matters! 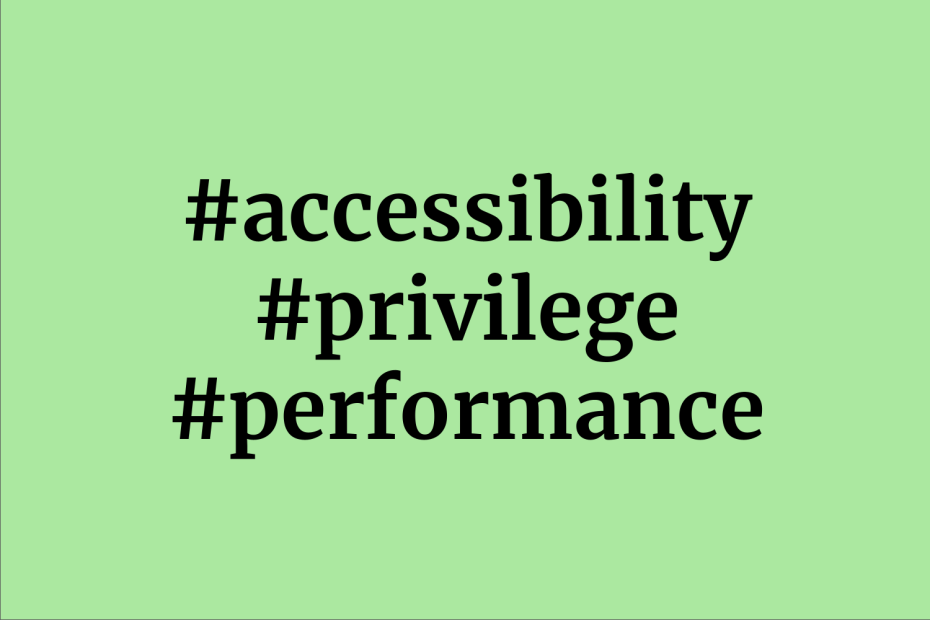 What Is My Privilege?

Since I was obviously unaware of major parts of my privilege, the first thing I needed to find out for myself is how privilege is defined. For me, a privileged person has always been someone who is entitled, someone thinking of themselves as superior to others. In my head, this definition obviously did not fit me. Tatiana’s definition of privilege shed an entirely different light on the matter:

a special right, advantage, or immunity granted to only a particular person or group

Looking at the topic from this angle, I suddenly felt like this applied to me in many different areas. The definition is so simple – yet so confronting. However, it sparked my interest to find out more about the topic, and everything I was ignorant about.

Tatiana provides a framework to break down the major areas in which privilege can be observed most frequently:

As well as the ideal constellation in this framework, as put forth by the white supremacist capitalist patriarchy (a term coined by Bell Hooks):

You think you’re not that? Well guess what – you don’t have to be EXACTLY that to be privileged. Privilege is not a yes or no question, it rather is a spectrum.

So let’s face it, even if it hurts: we’re all privileged – just in different ways…

Imagine the framework presented above to be a wall. The more boxes you tick, the higher up you get to climb. If you tick all of the boxes, the wall is not visible at all to you. Therefore:

privilege doesn’t dictate how hard we work, how far we go – privilege determines where we start

So let us have a look at my very own privilege block. I am:

I tick six of the eight boxes. I can barely see the wall, which puts me in a position that can hardly get any better (like the person on the right below).

In addition to that, even though I do not exactly fit into the “cis male” and “protestant” box, I am privileged because I present as gender conforming, and do not practice a religion that is automatically revealed by my appearance – which gives my privilege block a bit of extra height.

the closer the proximity to the ideal persona, the higher the privilege

But why is that? The privilege we are born with is random, but the system in which we make use of this privilege is not. It is built in order to give more privileged people more power. And our ignorance towards exactly that is a great way to hide our bias.

I did not earn everything I received. I inherited. I profit from my network. And I can often charge a fixed sum no matter how much the actual input is because of my qualification. I do not work harder, and I most certainly do not work more in hours than many people who earn less than I do.

So it is about time for me to put myself, and my emotions into context.

capitalism scares us with scarcity

But there are a vast amount of people out there who have all right and reason to be much more scared than I am.

What I considered most important was the following quote from Tatiana:

Well – I used to be the one who empathized, always. But how would I know how things look when your privilege block is much lower than mine is? I assumed that things were made for my understanding, since I am very close to the norm. Plot twist: some of them are not.

Very presumptuous of me to think I know best.

Instead of assuming that things do not make sense because I do not understand them, I now have to ask myself whether those things were made for my understanding in the first place. And in order to be able to answer this question correctly, I need to actively consume media that doesn’t center my experience.

Now that I am aware that I have power that I do not necessarily deserve, it is about time to share it. But how?

Don’t I come off as even more presumptuous when offer other people to “share” my privilege? AITA? I honestly do not know who to ask at this point – so I will officially be resorting to trial and error.

So here I am, very confronted, but happy about that. Ready to start – but where? Ready to ask – but whom?

nothing about us without us

Well, I guess it is time to overcome the fear and just start somewhere, asking people who experience things differently than I do.

If you were to ask me a couple of days ago whether I see myself as privileged, I would have tended towards a no on most aspect. The light Tatiana’s talk shed on the matter helped me understand my own privilege, see what I have ignored for a long time, and gave me opportunities to aid others in overcoming this wall.

Equality is not given by birth and the system we life in makes it worse. You cannot sit at the table with all the cool kids if you do not tick the boxes. But what qualifies the ones who sit at the table to even be there?

Meritocracy is a construct – but certainly not reality. When Tatiana brought up the term I had to think about my Corporate Identity – the font I used for my signature “M” ist called Meritocracy – what are the odds, I have always strongly believed that hope dies last…

In the end, it all comes down to a question of awareness. Being aware, that our experiences in real life center the white, able-bodied, neurotypical persona, will inevitably make us aware that most experiences on the web do so too.

According to the WCAG 75% of the 1m most visited websites are not fully accessible to people with disabilities – mostly due to reasons that could easily be solved. This shows pretty well how unwanted full accessibility and inclusion is – and how little willingness there is to un-center the ideal persona experience.

we must learn to lift as we climb – Angela Davis

My Individual Contribution to the Change

I am excited, and nervous – but ready for what’s to come, ready to share my power.

If you would like to find out more about the topic take the time and listen to Tatiana’s talk:

The slides she presents during her talk can be accessed here.

Still curious? I can highly recommend an article written by my colleague Pamela focussing on accessibility in a governmental context – find it here.

Contents of the Article

May We Offer You Some Cookies?
Hey you, dear visitor! As one does for every visitor, we baked you some cookies that we'd like to offer you. You might already know that some are necessary for our site to properly work and others you can choose taking or denying. We just want to let you know that if you don't like to accept our cookies, some features and functions of your browsing experience on this site may be affected. So let's hope you're taking our freshly-baked gift here. Bon appétit!
Manage options Manage services Manage vendors Read more about these purposes
Choose your cookies
{title} {title} {title}